The UK true fleet market grew by 1.4% in July, according to the latest figures from Dataforce.

The private market scored a marginal growth of 0.1% over July 2017 and special channels increased by 2.8% thanks to the self-registrations by dealerships and manufacturers.

Year-to-date the true fleet market was down by 5.6%, while the total market overall almost reached 164,000 registrations for July, which equates to an increase of 1.2%.

The main pillars for the success of the brand from Wolfsburg were the Golf, the all-new T-Roc (already in the top 10 of Small SUV) and the Tiguan, which achieved an all-time high in market share in July.

Vauxhall, Ford and Mercedes, second, third and fourth respectively, all were down, while Audi in fifth was up 4.9% and BMW in sixth was up 9.4%. Both achieved a more than solid increase although this didn’t result in gaining positions in the ranking.

Nissan retained their seventh position while Seat had an impressive 30.8% uplift, jumping from rank number 12th into eighth position.

A similar improvement was achieved by Peugeot climbing up the ladder by three positions into 10th behind Kia. And the biggest volume growth in absolute figures within Peugeot came - surprise, surprise - not from an SUV but from the Compact Car 308.

The biggest absolute rises in July both by volume and by percentage growth came unsurprisingly from the group of Compact and Small SUV respectively. With 22.8% the share of the SUV Compact segment reached a high never seen before in the UK true fleet market.

Strongest player in July (and year-to-date as well) was the Nissan Qashqai followed by Volkswagen Tiguan and Ford Kuga. With the Grandland X from Vauxhall in sixth place and the Karoq from Škoda (10th) there were two new entries in the top 10.

Within the Small SUV the best newcomer was even able to jump into second place behind the segment leader Vauxhall Mokka. And this is the Seat Arona. In July, the Arona was number two, within the model range of Seat behind the Leon.

Seat is actually a good example for the increasing relevance of SUVs, says Dataforce. Until August 2016, the SUV share at Seat was exactly zero. This has changed dramatically with the introduction of Ateca and Arona; in July the share was no less than 37% in the true fleet market.

Across the top 25 brands in July, SUVs accounted for 40.9% registrations compared to 32.9% in July last year.

There are only a very few OEMs where it was the other way round, i.e. that recorded a decline in their SUV share. Nissan is one of them due to a declining volume of the Juke, a model which will be replaced next year and is therefore getting closer to the end of its lifecycle. But despite this situation their SUV share was still 91% and only beaten by SUV specialists such as Mitsubishi, Jeep or Land Rover. 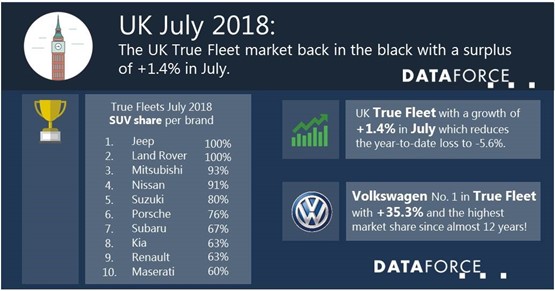