Thurrock Services on the M25 has been rated England’s worst motorway services in a user survey by the independent transport user watchdog Transport Focus.

For the second year running, motorway service operators have performed well overall with 92% of visitors happy with their visit, although value for money continues to be a key area for improvement.

Anthony Smith, chief executive of the independent watchdog Transport Focus, said: "As the summer holiday getaway gets into full swing it’s good to see motorway services customers feel they get a good experience.”

Across the country continued investment by operators is making a real difference to driver experience when they stop at services.

In last year’s survey, Heston East was the lowest ranked site with 62% satisfaction. This year it has seen a significant increase to 88% satisfaction.

The biggest improvement of any site this year was at Stafford South – which has gone from 70% satisfaction in 2017 when it was ranked second lowest to 99%, the second highest performer in 2018.

This year’s lowest ranked services, Thurrock, recorded a satisfaction rate of 68%. However, the services were undergoing refurbishment at the time of the survey and it will be hoping to a similar uplift next year.

Smith said: "Motorway service operators need to focus on ensuring customers see their experience as value for the money they’ve paid - that there is good range of food on offer and that buildings are maintained to a high standard.”

In this second annual survey Transport Focus asked 9,600 customers about their experience at 111 motorway services in England. Visitors had their say on facilities such as toilets, staffing, food and drink. To read the full report, click here.

Overall, the survey found 92% of customers were satisfied with their visit including:

*services known to be undergoing refurbishment at the time of the survey. 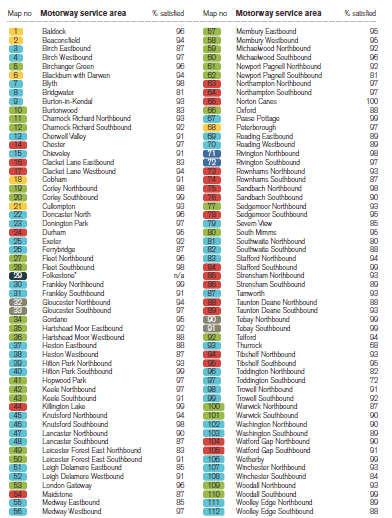